In Memoriam - A tribute to David Trendell

The choir which David Trendell directed for twenty-two years pays tribute in a collection of specially chosen pieces by David’s colleagues, friends and former students, interspersed with the Renaissance polyphony which was Trendell’s area of scholarly expertise. His deep love for the Song of Songs has inspired many of the inclusions, and its nature imagery threads through the disc, adding a suggestion of renewal and rebirth to the memorial tone of works written in the difficult months after his untimely death.

The composers’ affection for David and gratitude for his life and musical achievements is matched by the intelligence and deep musicality of the choir which he raised to an international reputation, and which here takes on a sophisticated and challenging programme in his memory.

"This disc is the result of an outpouring of love and, naturally, of grief, brought together in a splendid collection that stands as a celebration of David [Trendell’s] life as much as a memorial…[the choir produces] renditions of transparent beauty and exemplary balance. A radiant tribute to a radiant musician"

"the 30-strong choir sings with assured intonation and a controlled vibrancy which brings alive the many contemporary works featured here...For quality of performance and diversity of repertoire, this is an outstanding disc."

"The Choir of King’s College do David Trendell’s memory proud here. I’ve admired several of their previous discs and I mean it as a sincere compliment when I say that his passing does not appear to have affected their standards. Clearly Gareth Wilson had stepped into the breach to excellent effect; he has trained them very well in what must have been a musically and emotionally demanding programme."

"The composers’ affection and gratitude for David’s immense achievements is here matched by the intelligence and deep musicality of the choir which he raised to international recognition, and which here embarks on a sophisticated and challenging programme in his memory, dispatched by a warmth and dedication that goes right to the heart. A moving tribute to a short but extraordinary life that deserves close scrutiny." 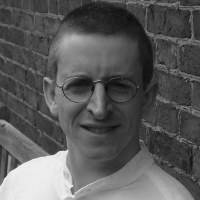 Gareth Wilson on In Memoriam